You are here: Home1 / crestron 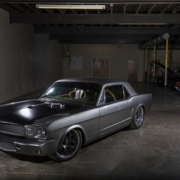 Our customers are technology guys. They like to tinker, create and modify things. They aren’t content with things that are basic. We have been helping our customers build beyond basic cars for 10 years now. This one is no exception. Geoff Beale built a beautiful 1966 Mustang hardtop that was featured in the most recent issue of Mustang Monthly. Geoff did something very unique with the electrical system in this car. He wired it with our Infinitybox system, then paired our system with a Crestron control system. The end product is an awesome Mustang with complete control through switches and an iPhone. Read below for more details.

Geoff runs Throwback Customs. In addition to that, he is highly involved with Crestron, which builds electronic control systems for conference rooms, board rooms and schools. Geoff paired his Crestron expertise with our Infinitybox system to get a powerful electrical system for his Mustang.

The car was in pretty rough shape when Geoff purchased it. Over several years, he has shaped, sculpted and created his ideal version of the 1966 Mustang. He installed a supercharged 5 liter Coyote Mustang engine on an Art Morrison MAXG chassis. From there, he has added subtle touches to the car that you won’t see anywhere else. 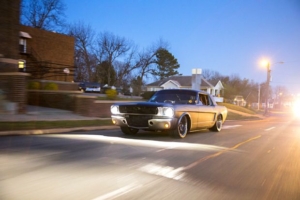 When it came to wiring the car, he came to Infinitybox to get our 20-Circuit Kit to be used as the main body controller. This kit is powering his lighting, ignition, starter, cooling fans, fuel pump, horn and other accessories. He added an extra POWERCELL to get 10 more outputs for the added features that he has in the car. He then added our inMOTION Motor Controller to control his power windows and locks. Lastly, he added our inVIRONMENT module to control his Gen-IV unit from Vintage Air.

Because of his experience with Crestron, he wanted to use their system as the touch screen and iPhone controller for the car. Our MASTERCELL inputs are all ground switched so Geoff was able to easily connect his inputs to the outputs of his Crestron controller. All the electrical features in the car can be controlled through the Crestron touch screen or the Crestron iPhone app. Geoff has a YouTube channel full of videos showing off the integration of the two systems. Here’s an example video of him showing off the electrical features in the car.

This video shows off the Crestron touch screen system that he paired with our Infinitybox system.

This video shows off his inVIRONMENT module in the car and how it works with his touch screen.

Jesse Kiser of Mustang Monthly shot a bunch a great pictures of the car. He also wrote a great article covering the history of the car, Geoff’s build and the unique features of this Mustang. You can read the entire article by clicking this link.

Congratulations to Geoff for finishing a spectacular build. We’re proud to be a part of this car.

Click this link if you want to learn how our Infinitybox system can help you wire your next restoration project. 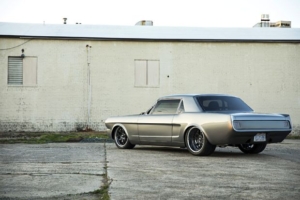