You are here: Home1 / start-up current

We get a lot of questions about cooling fans and whether or not you can drive them directly from a POWERCELL output without a relay.  In this post we’re going to talk about cooling fan in-rush current and show you what this looks like.

Any motor has an in-rush of current that flows through it upon start up.  To keep this simple, the windings of the motor look like a short circuit until they start to turn.  At start up, the current flow through the windings is high but settles down to a steady-state current level when the motor gets to its operating speed.  This peak in-rush current can be 4 to 8 times the steady-state current, depending on the motor.

When you buy a typical cooling fan, the manufacturer will tell you that you need a high-current relay to switch the fan on and off.  Typically these relays are 40 or 70-amps.  You need to use a relay with contacts that are sized to handle the in-rush current that flows to the motor.  With our Infinitybox system, we don’t use relays.  We use MOSFETs designed to control inductive loads like motors.  The point of this blog post is to show you what the in-rush looks like on a typical cooling fan.

We used the cooling fan in our 1979 Jeep CJ7 to get a real-life example of what this in-rush looks like.  The fan has a 16″ diameter and we powered it directly from the Jeep’s battery.

Here’s how we collected the data for this graph.  We used a precision current shunt in series between the battery and the cooling fan.  We used a Keysight DSOX1202G Digital Storage Oscilloscope to measure the voltage drop across the current shunt.  The shunt that we used was calibrated to 100 mV per 1 amp of current.  The battery was fully charged to 12.7 volts and the fan was mounted in the radiator shroud against the radiator.  We used a switch to trigger the fan and captured the waveforms.  This picture shows the current flowing to the cooling fan motor over time. 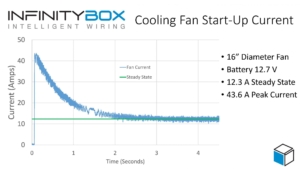 You can see that there is an in-rush of current flowing to the cooling fan motor when it starts.  This in-rush peaks at about 43 amps then settles down to a steady-state current flow of 12.3 amps.

Our Infinitybox system has an added feature that you can’t get from a relay.  Since we are using MOSFETs, we can do something called Pulse Width Modulation or PWM.  This lets us turn the POWERCELL outputs on and off thousands of times each second.  Using PWM lets us efficiently control the flow of current from a POWERCELL output.  For fans, we do something called soft-starting.  This lets us gradually ramp up the current to the fan to smooth out the in-rush current.  We’ve blogged about this before.  You can read it here.

Stay tuned for a follow up post that will show the effect of PWM on the in-rush current flowing to our Jeep cooling fan.  Click here to contact our team if you have any questions about this post or anything else related to wiring with the Infinitybox system.