Congratulations to Frank Hinmon for being a Great 8 Winner at the 2020 Detroit Autorama.  Frank and his team have put a ton of effort into this car to make it the best and it shows.  In addition to making it to the Great 8 at the Detroit Autorama, his car was one of the Select Six at the Chicago World of Wheels. 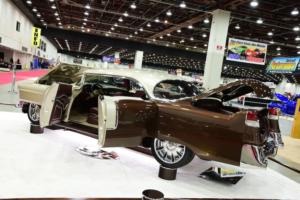 The car is an engineering masterpiece.  It is full of detail.  They started with a 2-door and re-engineered it to make it a 4-door.  From there, the paint, the interior, the engine, the chassis are all integrated seamlessly to create this Great 8 Winner.  Check out this video to see the full details.

Thanks to EClassic Autos for the great video coverage at the show. 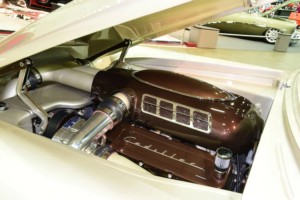 Frank wired the car with a complete Infinitybox system including our 20-Circuit Kit, 2 inMOTION cells, inTOUCH NET, inRESERVE and inVIRONMENT.

Beyond all of the body modifications and mechanical details in the car, this is a complicated car, electrically.  Using the Infinitybox system made creating a complicated wiring system very easy.  The car was wired with off-the shelf components from Infinitybox and configured through software to do what Frank wanted it to do.  The distributed architecture of the Infinitybox system made the runs of wire short and kept the bulk of the harness to a minimum. 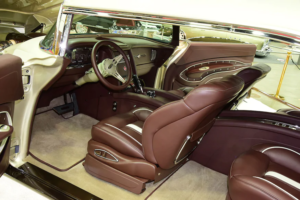 Frank has inTOUCH NET as part of this system so he can control the entire car from his iPad tablet or a touch screen head unit mounted in the dash.  His windows can be controlled from the iPad so can the door poppers.  This also includes using our inMOTION motor controller cell to raise the hood and the trunk by pushing a button on his tablet.

The power, flexibility and versatility of the Infinitybox system gave Frank the control he needed to wire this winning car.  The entire Infinitybox team is proud to be a part of this project.  Congratulations again to Frank for an award well deserved. 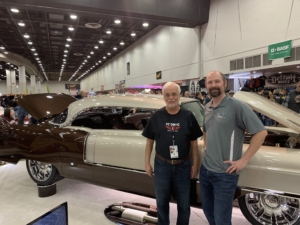 Click on this link to contact the Infinitybox team to learn more about our full range of wiring and electrical products. 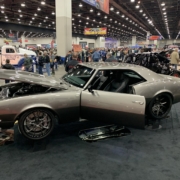